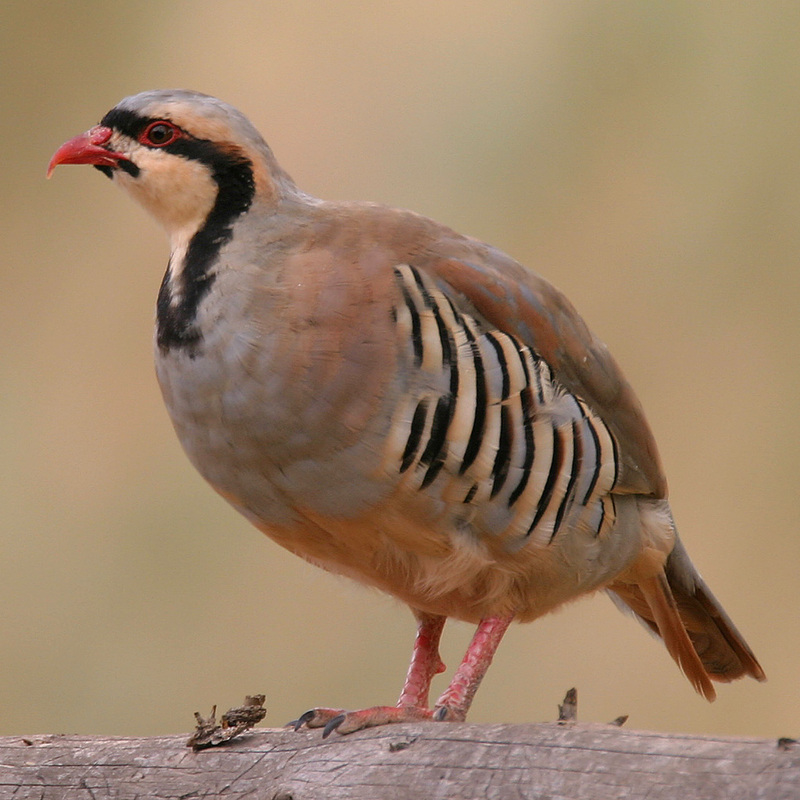 The chukar partridge (Alectoris chukar), or simply chukar/Chakor, is a Palearctic upland gamebird in the pheasant family Phasianidae. It has been assumed to comprise a superspecies complex along with the rock partridge, Philby’s partridge, and Przevalski’s partridge and handled in the past as conspecific especially with the first. This partridge has clearly pronounced black and white bars on the flanks and a black band running from the forehead to the eye and going down the head to form a necklace that encloses a white throat. Native to Asia, the species has been introduced into many other countries and wild populations have established themselves in parts of North America and New Zealand. This bird may be found in regions of the Middle East and temperate Asia.

Alectoris chukar is a medium-sized partridge. The plumage pattern is comparable for both sexes and unique among game birds of North America. Chukars are gray-brown above with a buff belly. A thick black line across the brow, eyes, and down the neck contrasts the white throat from the gray head and breast. Flanks are noticeably banded black and white-chestnut and the outer tail feathers are chestnuts. Bill, borders of eyelids, legs, and feet are bright pink to deep red or crimson. Both sexes can have a little tarsal spur, however, normally this is suggestive of males. Juveniles are smaller and are mottled brown and gray, with just slight brown barring on sides. In its native environment, coloring can vary greatly; birds in more arid places tend to be grayer and whiter.

Chukars are generally opportunistic and graze on vegetation, including grass and forb seeds, green grass, forb leaves, and various shrub fruits, according to the relative amount and seasonal availability. On western rangelands, important meals are seeds and leaves of introduced grasses and various forbs in the sagebrush environment. Cultivated grains are ingested when accessible, although the chukar habitat in North America is frequently not near the agricultural areas. In Hawaii, several foods are accessible, however native shrub fruits and imported herbaceous plants are still needed. Young chicks usually ingest insects. Adults do not eat a large number of insects but are known to take locusts when accessible.

Alectoris chukar may be found in North America throughout the west in steep, hilly, rocky places in varied habitat types. The Great Basin area of the desert shrubs is representative of their preferred environment; the climate is dry to semiarid, water is generally accessible from scattered sources, and temperature variations. The grazed and damaged public spaces provide various grasses and seeds with scattered plants while the rocky terrain provides cover. In North America, such habitats are frequently distant and not near farmed land, yet they will use such areas when available. Unsuccessful attempts to transplant the chukar into other regions of North America reveal that they are already established in most potential habitat types.

Chukars are diurnal and eat on the ground throughout the morning and afternoon. They do not migrate and any seasonal movements are altitudinal. Flight is frequently restricted to short distances downhill, usually when flushed. They hop while crossing rough terrain and prefer running to flight. The fundamental social group is a covey, consisting of varied numbers of parents and they’re young, and the biggest groups are situated around water sources. Larger disconnected clusters emerge throughout the winter. Chukars roost on the ground under foliage or outcrops. Males actively guard their breeding area.

Distribution of the Chukar in the USA