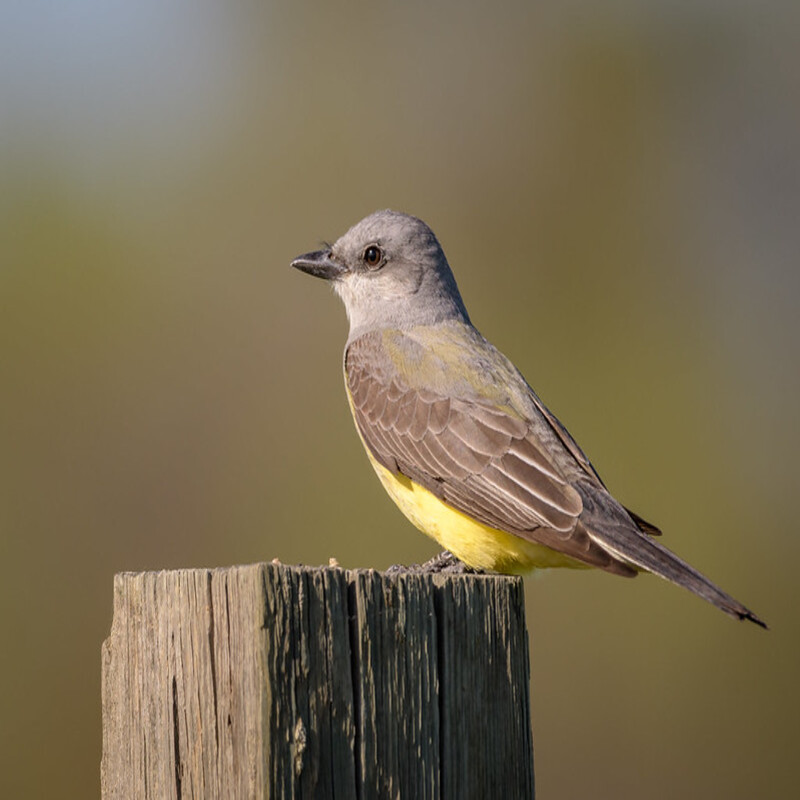 The Western Kingbird, Tyrannus verticalis is a huge tyrant flycatcher that can be found throughout western North America, as far south as Mexico. The species can be identified by its black squared tail with a white outer line.

Western kingbirds are medium-sized flycatchers. Males and females both have a small black bill, dark eyes, black legs and feet, and an orange-red center crown patch that is frequently hidden from view. Their heads, necks, and breasts are ashy gray. Their lores are black, while their malars are pure white. Their coverts are dark, while their backs are an olive green hue. Their tail is square in shape and has white borders. Their stomach and under tail coverts are a brilliant yellow color. Juveniles resemble adults but are paler overall.

Western kingbirds are primarily insectivorous. These insects, which include bees, robber flies, flying ants, and grasshoppers, are relatively large in comparison to those consumed by other flycatcher species. One study discovered that the majority of their food comprises of insects belonging to the Coleoptera and Orthoptera groups. Additionally, Western Kingbirds eat fruits, berries, and arachnids. Among their recognized dietary sources are buckthorn fruits and sumac or poison ivy seeds.

Western kingbirds prefer arid savannas, croplands, and riparian forests with scattered trees and bushes. They prefer vast, lofty trees with numerous perches. Western kingbirds have been observed in metropolitan environments, where they utilize man-made infrastructures such as utility poles and wires.

Although western kingbirds are generally solitary, they are occasionally seen in small pairs or groups, particularly during the winter. They have a reputation for being aggressive toward prospective avian predators like hawks, crows, and owls, chasing them away from nesting places. They take advantage of high nesting density by clustering together to fight off prospective nest predators. A group of up to ten individuals has been witnessed assaulting.

Distribution of the Western kingbird in the USA

Breeds over the western United States and Canada, from southern Canada to northern Mexico, and from the Pacific coast to the Great Plains. Winters in the tropics and is a regular fall migratory along the Atlantic coast.