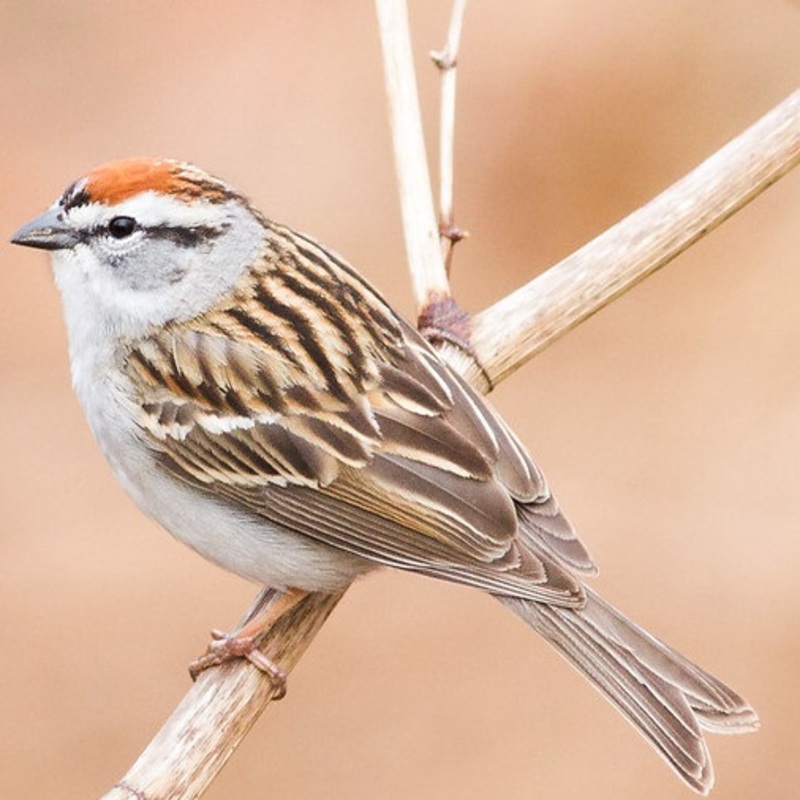 The chipping sparrow, Spizella passerina in Latin, is a New World sparrow in the Passerellidae family. The eastern and western chipping sparrows are subspecies of this sparrow. It is widespread, tame, and common throughout North America. Northern populations migrate south in the fall to overwinter in Mexico and the southern US, returning north in the spring.

Chipping sparrows have a bright chestnut crown with white superciliary areas. lores and a buffy white chin. Their back and wings are streaked with black and brown. The bill is black above and pink or yellow below. Legs and feet are flesh-colored at hatching, becoming salmon with age. Males and females look alike. Males are slightly larger than females but weigh less in the summer.

Chipping sparrows feed on grass seeds and annual plant seeds and fruits. During the breeding season, when up to 38% of their diet is animal prey, they eat insects. A variety of insects and beetles prey on moths and butterflies. Small seeds are preferred by chipping sparrows, especially crabgrass (Digitaria sanguinalis) and foxtail (Setaria glauca). Insects and seeds from the ground or leaves and stems are their preferred sources of food. This is to help their young process their seed diet.

Unlike most sparrows, Chipping sparrows spend their winters and breeding seasons in open woodlands, unlike most sparrows. They live in open forests, especially coniferous forests, and riparian forests. They prefer shady forests. Chipping sparrows are found in suburban areas, urban parks, orchards, and other human-modified landscapes. During migration, they pass through grasslands, desert scrub, and mountainous areas. Compatibility with American tree sparrows (Spizella arborea) may limit the winter range. (Middleton)

Chipping sparrows can hop and run on the ground and fly at 22-32 km/h. They are most active in the morning and early evening, when they are foraging. During the breeding season, they defend territories from other chipping sparrows, except mates. Males sing and threaten to defend breeding territories. Females defend the nest area.

Distribution of the Chipping sparrow in the USA

Chipping sparrows can be found across North America. Some populations migrate to breed as far north as central Yukon and as far east as Newfoundland. They are found in suitable habitats throughout the United States and Mexico.