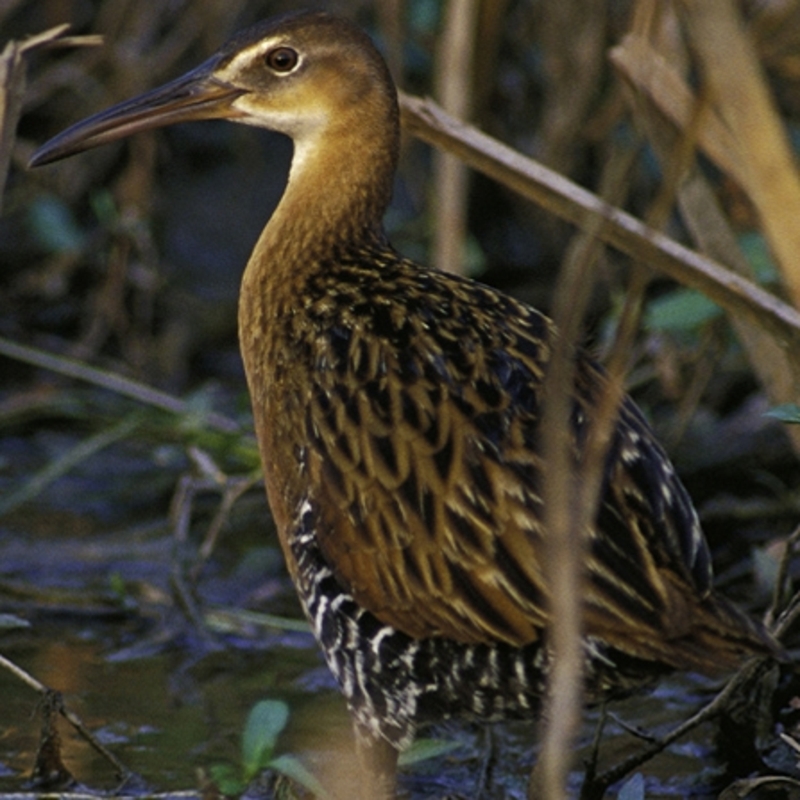 The rust-colored Rallus elegans is a large, slender marsh bird with a long bill and long toes. It is the largest rail system in North America. Rallus elegans has an olive-brown upper body, a reddish-brown breast, and banded flanks in black and white. Its tail is small and frequently raised. Females and males are similar in appearance, although females are often smaller than males.

Rallus elegans is classified as an omnivore but prefers crustaceans, fish, and insects as food. It will occasionally graze on plants or seeds. Water is critical to R. elegans, as it will soak its meal in water before ingesting it, even if it comes from land. Their bill and legs are adapted for probing and foraging in water. Crayfish, red-jointed fiddler crabs, clams, perch, and aquatic beetles are also common prey items.

n the Midwest, Rallus elegans prefers permanent freshwater marshes, but it also uses brackish wetlands. Grasses, sedges, rushes, and cattails all provide valuable cover. They are most frequently found in rice fields in the southeastern United States and on rare occasions in roadside ditches. Additionally, Rallus elegans is prevalent in coastal places with saltwater marshes.

The social habits of Rallus elegans are poorly understood. During the breeding season, pairs form, and males are quite territorial during this period. Males actively pursue males of their own species, or even of other species. Outside of the breeding season, it is believed to be primarily solitary. Rallus elegans is likewise believed to be a nocturnal solitary migratory. This is partly owing to the fact that it is territorial. Their flight is typically brief and low to the ground, with their feet skimming the foliage’s tips.

Distribution of the King Rail in the USA

Prefer freshwater habitats, but will also utilize brackish and tidal wetlands along the Gulf and Atlantic coasts from Texas to New York. On the Gulf Coast, it is common; further inland, it is local and rare. For the winter, northern birds migrate to the southern sections of their range.