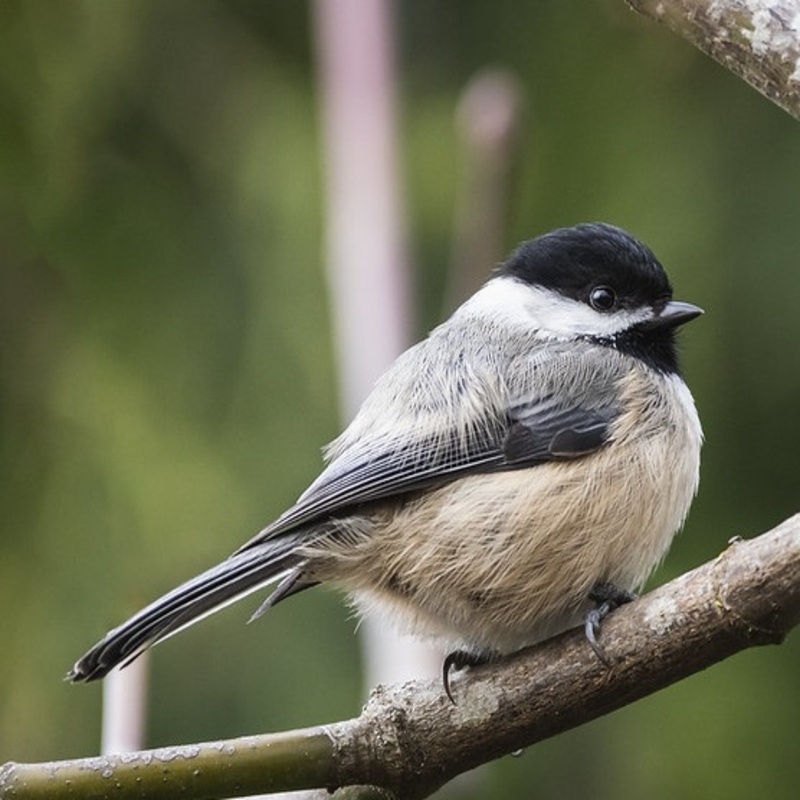 Poecile atricapillus, known to be a black-capped chickadee, is a nonmigratory songbird of North America. It is a tit Paridae family bird. It is the state bird of Massachusetts and Maine, as well as New Brunswick, Canada. With its strong spatial memory and fearlessness near people, it is recognized for its ability to decrease its body temperature during chilly winter nights (sometimes feeding on the hand).

Their small plump bodies, solid black head and bib, and white cheeks make them clearly identifiable. They are little birds weighing 11 g and measuring 13.3 cm. Their wingspan in flight is 20.3 cm. Their backs and wings are dark greenish-gray with white and black stripes. Their bellies are white with rufous flanks. They have dark legs and tiny black beaks. Chickadees are gender-neutral.

They eat both animals and vegetation (the overall consumption has been measured to be about 70 percent animal and 30 percent plant). Insects and spiders are major animals feeds. Prefer caterpillars throughout the breeding season. Chickadees consume dead deer, skunks, and fish. Chickadees consume honeysuckle, blackberries, hemlock seeds, and wax-covered berries like poison ivy and bayberry. They consume seed and suet from backyard bird feeders.

Black-capped chickadees “hop” on trees (and infrequently on the ground). During the day, these birds are highly busy, often foraging upside-down. Black-capped chickadees form monogamous couples that mate for life. This species’ social structure has two extremes: territorial couples during the breeding season and non-breeding groups.

To find them, look for them in cottonwood trees and willow thickets. They are usually found around forested regions. They frequent backyard feeders. Black-capped chickadees nest in holes in dead trees or stumps and are drawn to nesting sites. These birds can be seen in thick conifer woods throughout the winter.

Distribution of the Black-capped chickadee in the USA

Throughout their range, black-capped chickadees can be found only in North America, from Alaska to the southern half of Canada and south to the upper two-thirds of the continental United States.