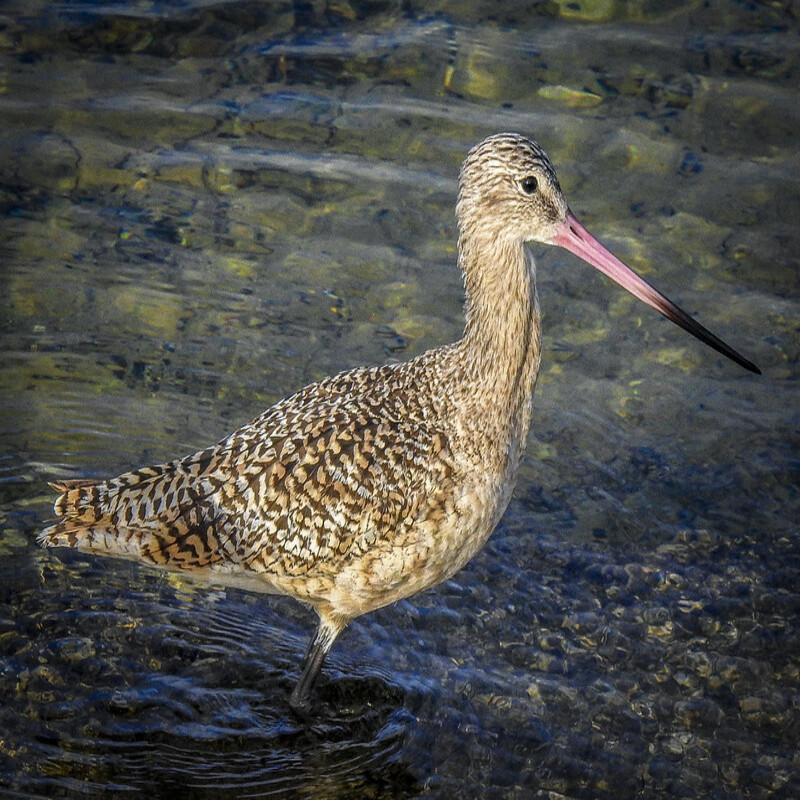 Marbled godwits, Limosa fedoa are huge migratory shorebirds belonging to the Scolopacidae family. It is the largest of the four godwit species on average. The marbled godwit is a big shorebird that breeds in the northern United States and southern Canada’s prairie pothole region. They make the longest continuous migrations of any bird and carry the highest fat loads of any migrating bird investigated thus far, diminishing the size of their digestive organs in the process.

Marbled godwits have a long, slightly raised creamy pink bill with a black tip, long bluish-gray legs, a rich buff-brown coloration throughout, cinnamon wing linings, and a cinnamon stripe across the wing and chest. In winter, the chest is buffy and simple.

Marbled Godwits feed on polychaetes, tiny bivalves, crabs, and earthworms throughout the winter. Their diet changes to insects, leeches, and tiny fish on mating grounds.

The marbled godwit is the most common godwit species. They breed on grasslands and marshes throughout the northern prairies of the United States and Canada, preferring areas with sparse or tall vegetation. Additionally, they are found in temporary ponds, pastures, and hay fields. Northern populations inhabit moist tundra or open taiga, lowland meadows and bogs, and coastal marshes.

Marbled godwits are primarily terrestrial birds with the ability to run and walk quickly. They are migratory, with a robust, quick, and direct flight path. They can also swim if they are foraging in deep water. Foraging consumes the majority of their daily time budget. Aggressive behavior is uncommon and is frequently linked to breeding season.

Distribution of the Marbled godwits in the USA

Breeds in Alberta and Minnesota‘s northern central plains. Winters along the coast between California and Virginia as well as along the Gulf coast.