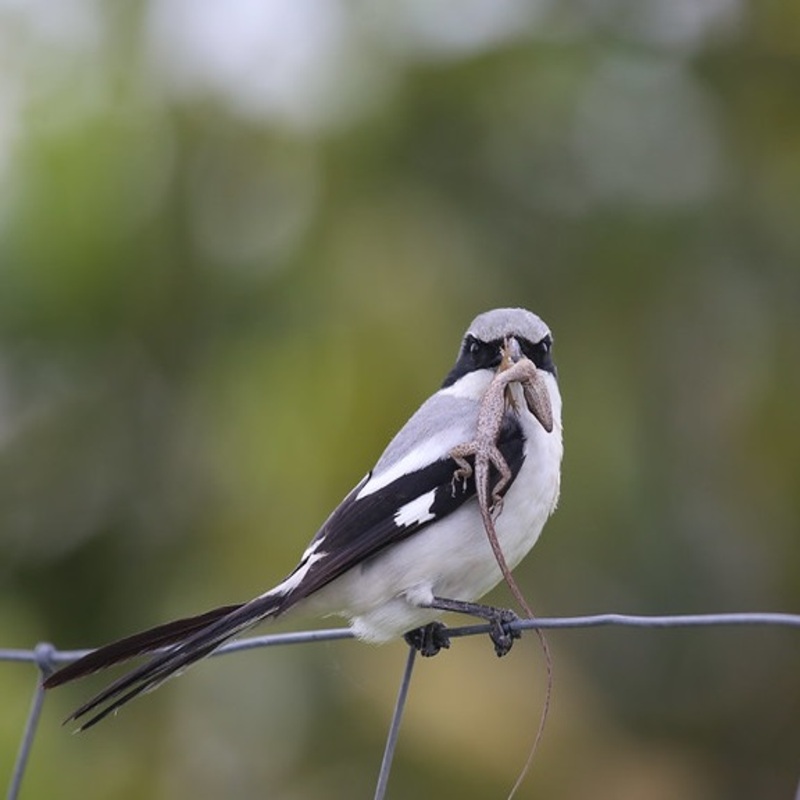 The northern shrike, Lanius borealis, is a big songbird species belonging to the shrike family Laniidae that is endemic to North America and Siberia. It is the largest of the shrike family’s members. It had previously been considered a subspecies of the great gray shrike, but in 2017 it was recognized as a separate species. There are six subspecies that have been identified.

Smaller in size than the northern shrike, with darker gray plumage with white underparts and a bigger black face mask that completely covers the eyes, the loggerhead shrike may be differentiated from the latter. It also has a shorter bill with a less pronounced hook than the common crow. Their phone calls are quite similar.

Northern shrikes are commonly seen perched on tall poles and trees, scanning their surroundings for food. They feed on arthropods such as spiders, beetles, lizards, bugs, and grasshoppers, as well as small vertebrates like mice and rats.

Breeds in the far north in spruce forests that are partly open or dispersed, as well as willow and alder scrub near streams or on the margins of tundra. Winters in comparable semi-open habitats, occasionally in wide grassland with a few high perches, but appears to prefer some brushy areas nearby in the spring and summer.

Feeds by spotting prey and swooping out to catch it. Prey is caught in the bill or foot, with bigger vertebrates being killed by a neck bite. Prey is sometimes impaled on a barbed wire fence or thorn, either for later consumption or to hold prey while eating it.

There are six subspecies that have been identified.

Distribution of the Northern shrike in the USA

Many, but not all, Northern Shrikes breed in North America, where they may be found from Labrador and Quebec to western Alaska. During the late fall and early winter, they travel south to southern Canada and the northern United States, where they spend the winter.