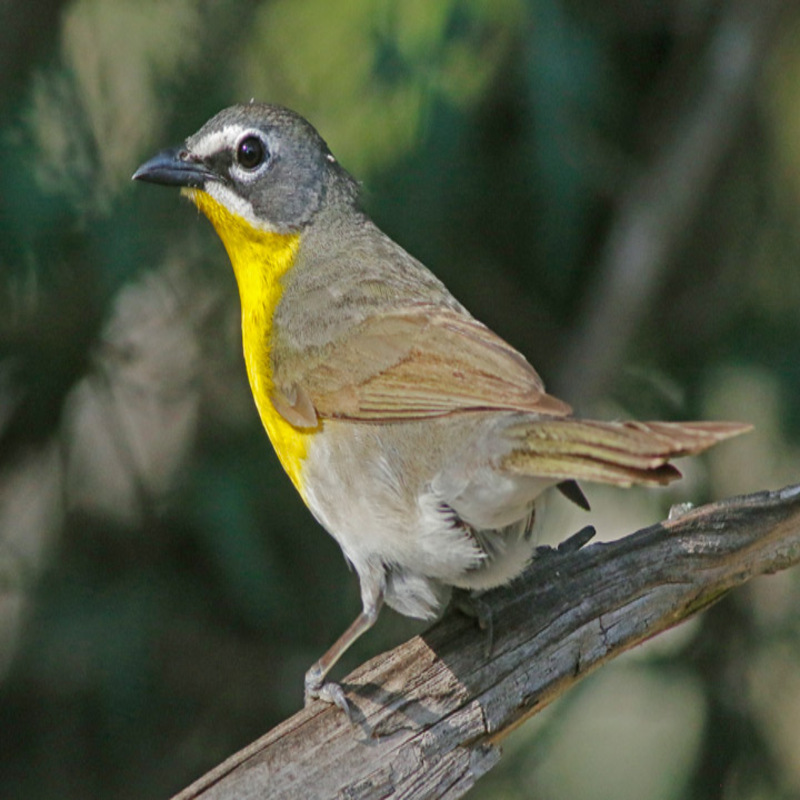 The yellow-breasted chat (Icteria virens) is a large songbird that can be found in North America. It is the only member of the Icteriidae family. It was previously thought to be the largest member of the family Parulidae, but some researchers believe it should now be considered a member of the monotypic family Icteriidae.

These birds have yellow-orange chins and throats. Their colors and plumage reflect a lot of UV light. This reflection has two peaks in the ultraviolet and 570-590 nm yellow light. Their eyes are white with gray flecks on their lower lids. Males and females have solid black bills during the breeding season, but small light stripes or dots on either side of the lower mandible near the base of the bill. This bill becomes more striped as the breeding season ends. Males and females have black foreheads with gray and black facial markings behind the eyes. During the season, males lose a lot of facial colors.

Invertebrates, grasshoppers, fruits, and berries are common food sources for adults. Their larvae are fed to their offspring. They can eat beetles, weevils, bees, caterpillars, and wasps with their feet, which they do. Strawberries, blueberries, blackberries, and grapes are also eaten by them.

Green and coniferous forests support yellow-breasted chats. Some of their preferred habitats include shrubby and brushy areas near streams and swamps, burned forests, and upland thickets of recently abandoned farmlands.

Diurnal and social, yellow-breasted chats During the breeding season, their songs are low-pitched and varied. They sing at night and imitate other birds. Their song types range from 41 to 100. Males sing together, allowing counter-singing. A male sings a song and another male responds with the same song. These songs establish territorial dominance. Yellow-breasted chats sing more in preparation than incubation and post-fledging. Males sing more post-paring and pre-nesting than post-fledging.

Distribution of the Yellow-breasted chat in the USA

A native of North America, the yellow-breasted chat from the southern plains of Canada to central Mexico, it breeds, then migrates south to Mexico and Central America and most part of the United States for the winter. This species inhabits areas with dense shrubbery.