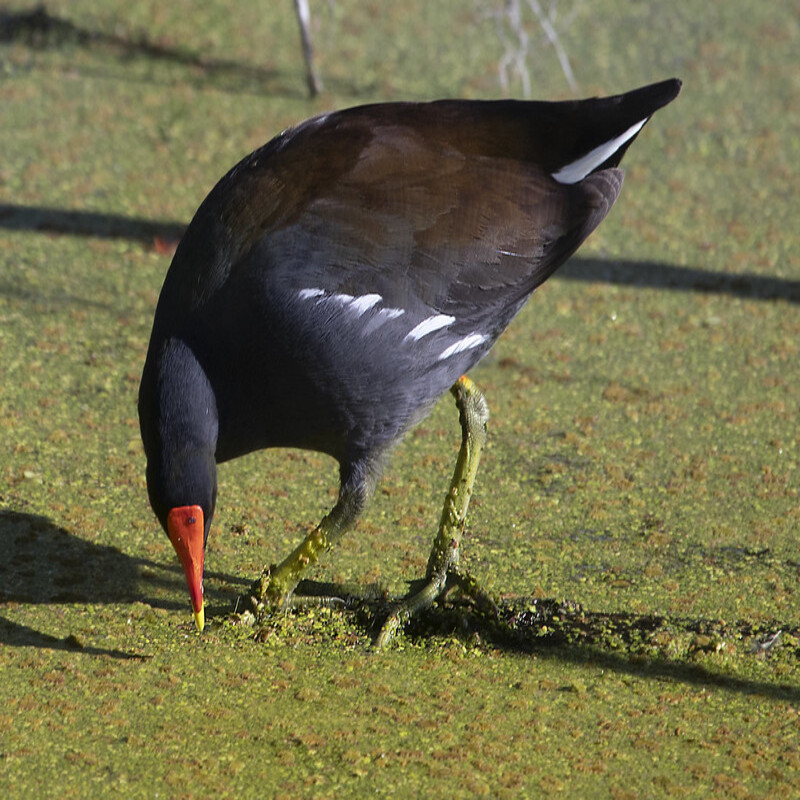 The common gallinule, Gallinula galeata is a species of bird belonging to the Rallidae family. The American Ornithologists’ Union separated it from the common moorhen in July 2011. It is found in the Americas near densely vegetated marshes, ponds, canals, and other wetlands. The species is absent from the polar regions and a large number of tropical rainforests. Elsewhere, the common gallinule is likely the most frequently encountered rail species throughout much of North America, with the exception of those locations where the American coot is prevalent.

The majority of Common Gallinules are charcoal gray in color with a white stripe down their flanks and brown with white outer tail feathers. Adults are distinguished by a brilliant red shield on their forehead and a red bill with a yellow tip. Adult birds resemble immature birds but lack the red shield and bill.

Omnivorous. The leaves, stems, and seeds of many water plants, as well as the fruits and berries of terrestrial plants, are major food items. Additionally, it feeds on insects, spiders, earthworms, snails, and other mollusks, as well as tadpoles. Occasionally consumes carrion and the eggs of other birds.

Closely associated with marshes, ponds, canals, ditches, and rice fields where pools of submerged or floating vegetation are interspersed with emergent or shoreline vegetation, this species forages on the water’s surface, among submerged plants, and along the shoreline and upland for plant materials and macroinvertebrates.

Numerous calls are almost certainly related to territorial behavior. Moorhens have a single dominating nighttime flying call, as well as three more cries that are made less frequently in flight and also from the ground. The most frequently encountered is a rush of harsh kek notes, frequently in groups of three or four.

Distribution of the Common Gallinule in the USA