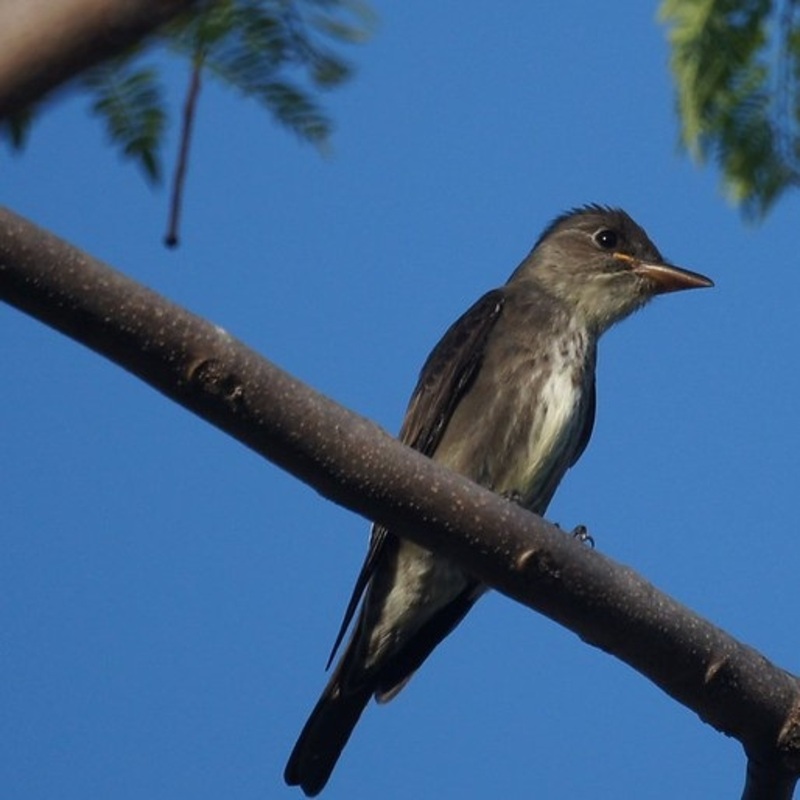 The Olive-sided Flycatcher, Contopus cooperi is small to a medium-sized passerine bird that is a member of the Tyrannidae family of flycatchers. It is a migratory species that migrate from South America to North America in the summer to reproduce. It is an extremely agile flier that feeds primarily on flying insects.

Above, the plumage is a dark brownish olive-gray (darkest on the crown), with white on the throat, center of the breast, and belly, and contrasting olive-gray sides and flanks (often streaked). Dark areas on either side of a white breast and belly are easily identifiable and frequently compared to the appearance of an unbuttoned vest.

Olive-sided Flycatchers are most frequently seen around the fringes of coniferous or mixed forests, where they can sit on large trees or snags, across open spaces, or in the burned forests with standing trees and snags.

Olive-sided Flycatchers have the longest migration of any flycatcher species that breed in the United States, with some traveling 7,000 miles between central Alaska and Bolivia.

Distribution of the Olive-sided Flycatcher in the USA

Breeds in Alaska,, eastern Canada, northern New England, and the Pacific Northwest, as well as the mountains of California, Arizona, and New Mexico. Spends the coldest months of the year in the tropic.