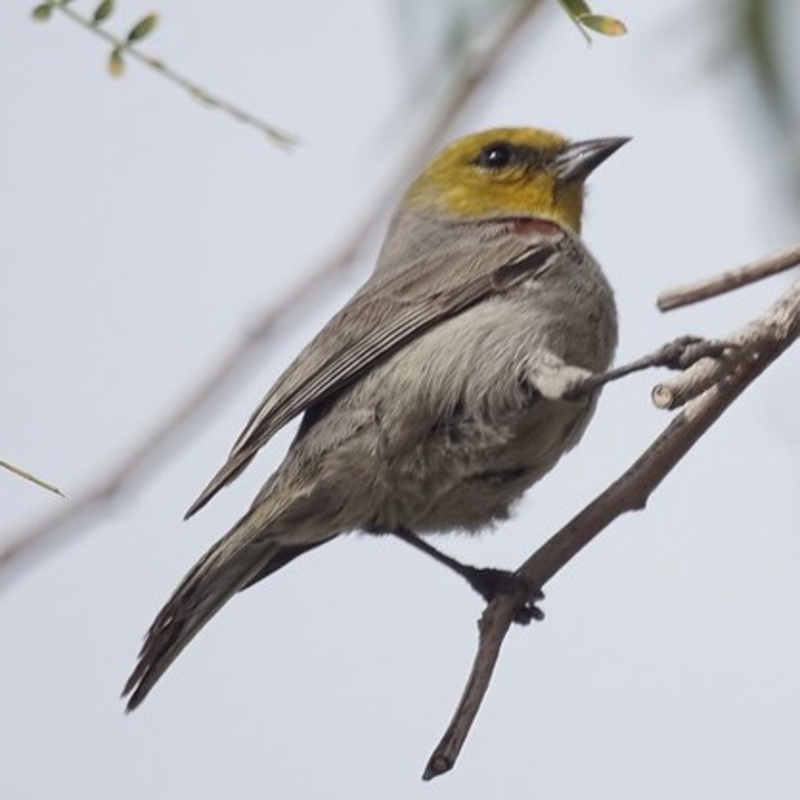 On the upperside, the verdin is ash-gray, while on the underside, it is pale-gray or white. The lores of the head are black and golden, and the head is yellow. In addition, there is a maroon patch on the shoulders. Males have a brighter overall appearance, but youngsters lack the yellow head, black lores, and maroon shoulder patch, and have a simple gray color across their bodies. An extremely tiny bird with a brief and pointed beak as well as a short and rounded tail.

The verdin’s primary source of nutrition is insects, which are supplemented by nectar, fruits, and seeds from legume plants. Verdins hunt for insects amid the twigs and branches of desert shrubs and trees, darting from branch to branch in search of prey. Also found in residential environments are verdins foraging for nectar from flowers and feeding at hummingbird feeders.

The verdin is predominantly found in desert scrub regions, notably in riparian zones and along washes, and it is a threatened species. Verdins prefer thorny scrub over open desert, and they may be found at lower elevations in central Mexico, however, they can also be found at higher elevations.

Foraging among living foliage of trees and bushes is preferred by the verdin, who rarely comes into contact with the ground. In order to investigate and acquire leverage when feeding, the verdin would frequently grab flowers and prey with one foot. In order to fly quickly from one limb or from one tree to another, the verdin employs short, rapid flaps.

Distribution of the Verdin in the USA

The verdin can be found in arid parts of southwestern North America, from southern Colorado down into Mexico, throughout Baja California, and along the Gulf of Mexico south to Tamaulipas, according to the National Geographic Society.

The Verdin can be found also in the following states in the United States – Arizona, Nevada, New Mexico, and Texas.