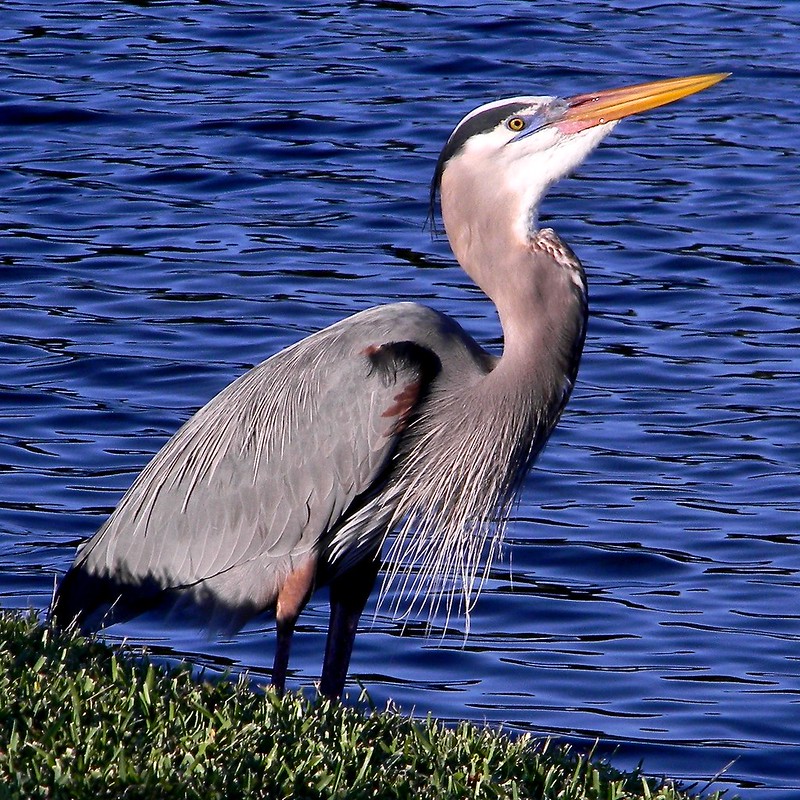 The great blue heron, Ardea herodias is a big wading bird in the heron family Ardeidae. It is found throughout most of North and Central America, as well as the Caribbean and the Galápagos Islands, near the coasts of open water and in wetlands. It is a very uncommon vagrant to coastal Spain, the Azores, and parts of extreme southern Europe.

Their backs and wing scapulars are decorated with long, slender white-gray plumes. In-flight, they have dark bluish-gray primaries and secondary wings. Individuals often have reddish or black markings on their sides, flanks, and thighs. The long legs are yellowish-green to dark gray in hue. Their lengthy necks range in hue from white to buffy, rusty-red, or gray, with a lighter head. A ring of white or gray plumes surrounds the neck. Whitethroat, crown, and auriculars, pale yellow eyes. A thick, blackish facial stripe runs from the lores to the supercilium, down the nape, and into many long plumes. Their sharp, straight bills are usually yellow but can be gray at the upper mandible.

The great blue heron fishes largely during the day and occasionally at night, but their most active period is between dawn and dusk. Herons wade in shallow water on their long legs and seize their prey with their pointed spear-like beak. The food of great blue herons is primarily composed of fish, but it also contains frogs, salamanders, lizards, snakes, juvenile birds, small animals, shrimp, crabs, crayfish, dragonflies, grasshoppers, and a variety of other aquatic invertebrates. Herons locate food visually and typically swallow it whole. Herons have been known to choke on huge prey.

Great blue herons are always found near water sources, such as rivers, lake borders, marshes, salty seacoasts, and swamps. They nest in tall trees near bodies of water and frequently nest in groups called “rookeries” that require a stand of appropriate trees. Breeding populations have been discovered at elevations of up to 1,500 m. The majority eschew sea environments along the east coast in favor of inland ecosystems.

The great blue heron is most active in the mornings and at dusk when the fishing is most productive. They are stalk-and-strike hunters who identify prey visually and consequently hunt during the day. Although they are solitary hunters, they frequently breed in rookeries and spend the night in flocks of over 100 other herons. Additionally, great blue herons are fiercely territorial and will protect their nests forcefully.

Distribution of the Great blue heron in the USA

Breeds in coastal Alaska, south-central Canada, and Newfoundland, as well as in Mexico and the West Indies. Winters in northern Alaska, central and southern United States, and southern New England, extending south into Mexico.